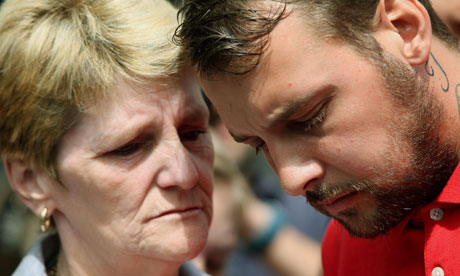 Britain’s top prosecutor was confronted by Ian Tomlinson’s family and told that his decision not to bring charges was a “fucking disgrace” and that he should “go back” to his “million-pound house”. There were tense and angry scenes as the newspaper vendor’s family faced Keir Starmer QC, the director of public prosecutions, at the Crown Prosecution Service’s new headquarters in London by the River Thames.

At 10.30am, 45 minutes before Starmer made the decision public, they were handed a 10-page letter by Stephen O’Doherty, the top prosecutor who made the judgment that they believe amounts to a cover-up.

O’Doherty is a deputy director of the CPS special crime division. At the family’s request, he and other officials left the room while the family and their lawyer read the letter.

It took seconds for them to reach the second paragraph and its stunning announcement that there would be no charges. The Tomlinson family reacted with a combination of devastation and raw emotion.

“Our lawyer opened the letter and then after a minute looked shocked and said ‘Oh no’. We knew then it was bad news,” said Paul King, Tomlinson’s stepson, who has acted as a spokesperson for the family over the last 16 months. His mother, Julia Tomlinson, and three other siblings who had gathered in the office could not hold back tears.

To request membership of this website please click the link in the panel above for the application page. Follow the simple instructions and leave the rest to us. Thanks!